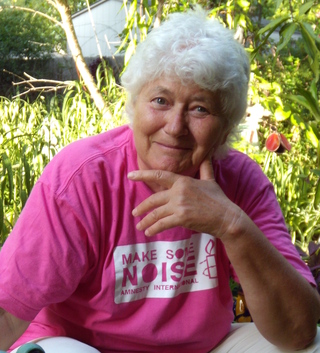 Pamela Ellen Ferguson Dipl ABT (NCCAOM), AOBTA(R) & GSD-CI, LMT (Texas) is an international author of several books of fiction and nonfiction published in the USA and in Europe in different languages. She is also an award-winning instructor of continuing education workshops in Asian Bodywork Therapy, and the author of major textbooks in her field. Pam is dual national, American and British, was born in Chihuahua Mexico, raised in Cornwall United Kingdom, and Cape Town South Africa. She has lived and worked in a dozen world capitals. She currently lives in Austin Texas surrounded by a garden of huge cacti, but teaches mainly in Germany, Switzerland and Austria.

Her eclectic writing reflects an early career in journalism on London's Fleet Street, her reporting in the Middle East, her extensive travels and her current work in complementary medicine. Her 10th book, Sunshine Picklelime, her first venture into writing for children, was published by Random House in the summer of 2010.

During her second career, teaching in North America and Europe, Pam has pioneered Asian Bodywork Therapy workshops in hospitals and schools of nursing, and has also innovated graduate level training in Trauma and PTSD, Depression, Aids and HIV+, Women's Health/Men's Health, and Palliative Care. As a survivor of metastatic breast cancer, Pam transformed her experiences into a video, Drawing Circles of exercises for postmastectomy, and into creative ways of working with cancer patients and their families. As a breast cancer activist, Pam has written extensively about the value of combining Western and Asian Medicine, including a chapter in the anthology Confronting Cancer, Constructing Change. She was also a former President of the (Vermont based) Breast Cancer Action Group.

Pam is certified as an instructor by the American Organization for Bodywork Therapies of Asia , and by the Shiatsu Society of Germany. She is also a Licensed Massage Therapist and approved Continuing Education Provider in Massage Therapy in the State of Texas. She is the former Dean of Asian Bodywork Therapy at AOMA Graduate School of Integrative Medicine, Austin, and also served on the national board of the American Organization for Bodywork Therapies of Asia as the first Director of the Council of Schools and Programs. She is the Asian Bodywork Therapy columnist of the monthly Acupuncture Today, and has also published articles in Massage Today, The North American Journal of Oriental Medicine (NAJOM) and the online International Journal of Therapeutic Massage and Bodywork (IJTMB).

Her passions include organic xeriscape gardening, and cycling. Her works in progress include a series of photographs of cycling activities in every city where she works and travels. She is also in the process of crafting her memoirs Cornish Cactus - Mining Memories.

Her latest work CROSSING LINES, an Austin-and-Border based political thriller, was published in October 2020 under her own imprint Border Coombe Press.

A story of oil, counter-intelligence and the corruption of power in the Middle East

A diamond heist involving the Vatican during the Montreal Olympic Games

PJ Picklelime is an adventurous little bird whisperer who seeks answers to the mysteries of life in the gardens and treehouses of neighbors of all ages.

TAKE FIVE: The Five Elements Guide to Health and Harmony

A colorfully illustrated guide on the five elements for teachers, students, and patients.

One of the first novels to expose the manipulative business practices of the tobacco industry.

Historic and Modern study of the Israel-Palestine conflict

DECORATION AND DESIGN FOR THE 80s

Interior Designs to suit all tastes and styles